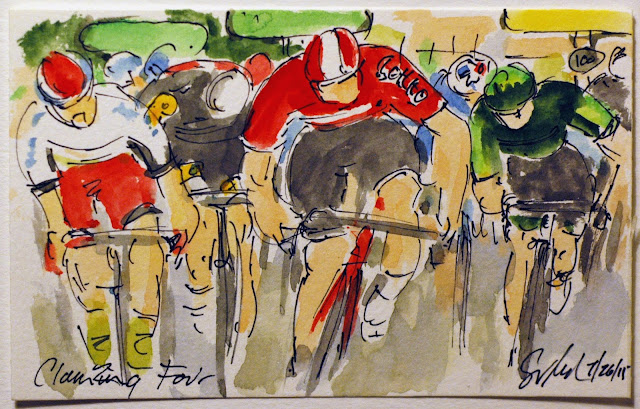 As the peloton circled the monuments on the Champs Elysees the cobbles continued to try out.  By the time the peloton entered the bell lap the sun had even peered out from behind the clouds.  With dry roads under their wheels the sprinters were sure to treat us to a spectacular dash for the final line of the Tour.  They didn't disappoint.  Although it was the big gorilla himself, Andre Greipel (Lotto Soudal) that should everyone else that he is the sprinter of this Tour de France.  Alexandre Kristoff (Katusha) had the early lead coming out of the final corner, and Bryan Coquard (Europcar) had the fastest closing speed, but Greipel was the one to put it together perfectly.  His victory on the Champs Elysees gave him his fourth stage victory in the 102nd Tour de France.  Peter Sagan (Tinkoff Saxo) was washed away in the sprint coming across the line seventh, but his fourth Maillot Vert was unassailable.  The one with the biggest disappointment was the Manx Missile, Mark Cavendish (Etixx Quickstep) who's sixth place on the stage was not what he had hoped four has he struggled over the Alps this past week.

This is an original watercolor and ink painting that was created using Yarka St. Petersburg watercolors and Steve Quiller brushes from Jack Richeson and Company, www.richesonart.com.  This painting, along with all of my cycling art, is available through my artist website at www.greigleach.com.  To buy this particular painting for only $60 USD, just follow the direct link at the end of this post.  Be aware, since this is an original work of art, once it has sold, it is gone.  I would recommend not delaying.