Tour de France, Stage 10: Off On His Own 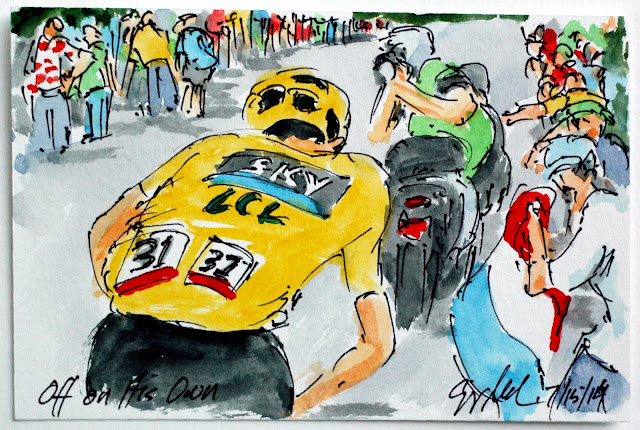 When Chris Froome (Team Sky) was asked about their strategy for the stage in a pre-race interview, his response was that he and the team would ride defensively.  When his teammate, Geraint Thomas, was interview at the end of the race he was asked about the apparent change to an offensive day in the saddle, his response, "We lied."  Froome attacked after his final teammate, Richie Porte, had swung off the front leaving all to Froome.  The ferocity of his attack immediately gain a gab on the last four men in the front group.  Only Nairo Quintana (Movistar) was able to stay remotely close the the team leader from Sky.   Ultimately, Froome was able to ride away from everyone else in the race, putting minutes into those who started the day thinking they might can time on the Maillot Jaune.  And it was Froome, not a Frenchman who raised his arms in victory at the summit in Le Pierre Saint Martin.

This is a small original watercolor and ink painting that was created using Yarka St. Petersburg watercolors and Steve Quiller brushes from Jack Richeson & Company, www.richesonart.com.  They are a small family run art supply company with some fabulous supplies for artists and crafters alike.  In addition, this painting is available through my artist website at www.greigleach.com.  To purchase this particular painting for only $60 USD, just follow the direct link at the end of this post.  Don't delay, this is an original painting, so there is only one like it.  When it is gone, it is gone.

Posted by artofcycling at 4:58 PM