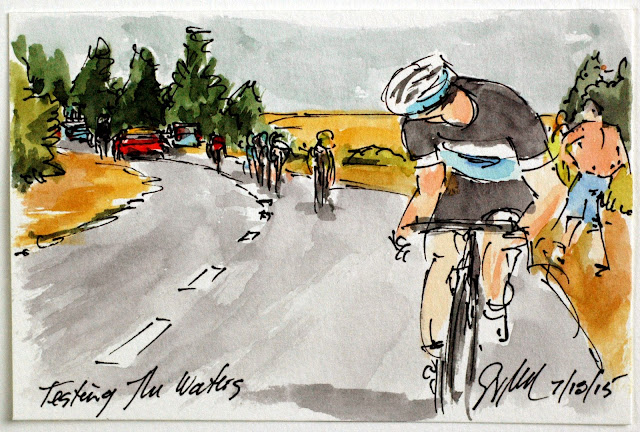 After the intermediate sprint, the large lead group split into two groups.  Etixx-Quickstep was one of the teams that managed to have more than one member of their team in the break.  The first to attack the break as they approached the town of Mende was Michal Golas (Etixx-Quickstep).  Most likely Golas was testing the resolve of his break away companions,  By attacking, he would force the others to chase thus setting up his teammate Rigoberto Uran to launch an attack for the line.  Of course there were other teams that knew this strategy and would be willing to pull the same move themselves.  AG2R was another team with two members in the group, FDJ had the strongest had with three teammates represented.

This is a small original watercolor and ink painting that was created using Yarka St. Petersburg watercolors and Steve Quiller brushes from Jack Richeson & Co., www.richesonart.com.  Plus, this painting, and all of my cycling art, is available through my artist website at www.greigleach.com.  To purchase this particular painting for only $60 just follow the direct link at the end of this post.  Don't delay, since this is a one of a kind original work of art, when it is gone, it is gone.