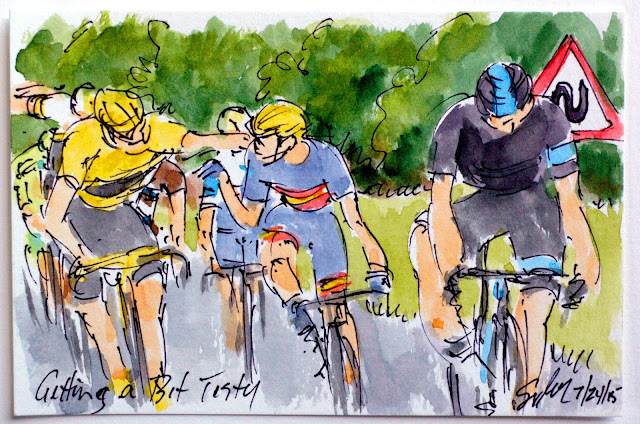 After his mechanical incident on the first climb of the day, Chris Froome (Team Sky) was rather annoyed with the behavior of some of his GC rivals.  As the peloton raced across the valley floor on their way to the next big challenge of the day, Froome took the opportunity to express his opinion.  As he pulled along side of Alejandro Valverde (Movistar) he offer a few choice words of condemnation.  Valverde probably responded that he was not the guilty party, the man Froome wanted was still up the road.  Valverde had simply sped up to avoid Froome and then kept going because of Niblai's move threatening the Spanish Champion's podium position.  Wooter Poels (Team Sky) waited for his team leader as the others continued their discussion of the etiquette of the peloton.

This is a small original watercolor and ink painting that was created using Yarka St. Petersburg watercolors and Steve Quiller brushes from Jack Richeson & Company, www.richesonart.com.  They are a small family run art supply business in the mid-west of the United States.  This painting is available, along with all of my cycling art, at my artist website, www.greigleach.com.  To purchase this particular painting for only $60 USD, just follow the direct link at the end of this post.  It is an original painting, so once it has sold, it is gone.  I would recommend not delaying.