Tour de France, Stage 20: He's Done All He Could Do 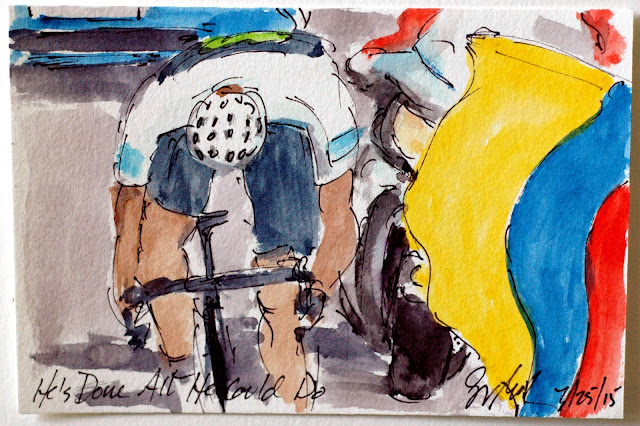 Cheered on by hundreds of Colombian countrymen along the entire route of the stage, Nairo Quintana and his team, Movistar have done everything they could do to gain time on the Maillot Jaune.  And gain time they did.  The wearer of the Maillot Blanc came within one minute and twelve seconds of the race lead of Chris Froome (Team Sky).  Quintana can hold his head high, knowing that he has taken second place and won the Best Young Rider jersey for the two Tours de France that he has raced.  No small accomplishment.  There were moments in the final mountain stage of this Tour de France that it appeared that the Maillot Jaune would change hands just one more time.  But in the end, barring any unforeseen disasters, Chris Froome will win his second Tour de France along with the Maillot a Pois of the King of the Mountain, Nairo Quintana will take home the Maillot Blanc for the second time and Peter Sagan will claim his fourth consecutive Maillot Vert.

Now it is on to the ceremonial ride and fast sprint to Paris and the Champs Elysee.

This is a small original watercolor and ink painting that was created using Yarka St. Petersburg watercolors and Steve Quiller brushes from Jack Richeson & Company, www.richesonart.com.  They are a wonderful small family run art supply company based in the northern mid-west of the United States.  This painting is available through my artist website at www.greigleach.com.  To purchase this particular painting for only $60 USD, just follow the direct link at the end of this post.  As it is a one of a kind original work of art, you may not want to delay your purchase, because when it is gone, it is gone.