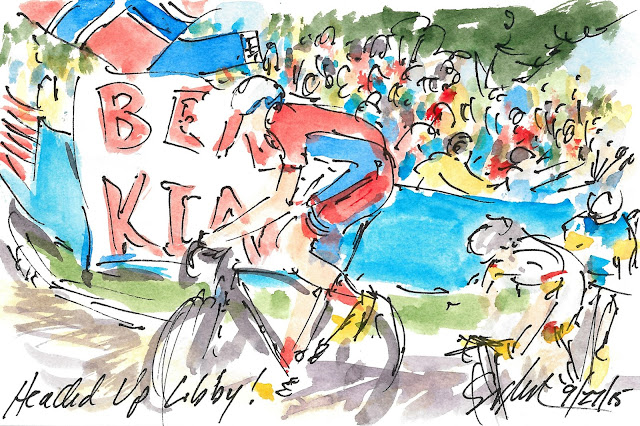 There was a lot of chatter about how flat and easy the Richmond 2015 course was when it was announced, but the peloton changed its tune the first time they road up Libby Hill, 23rd Street and Governor's Street in race conditions.  The only man in the peloton who had grown up with the course was Ben King (USA) and his local fans made sure to scream their support as he climbed the Libby Hill on the lead in the first lap of the day.  Many non-cycling fans asked me if the riders had let King ride out on the front.  First he was out there for over 100 kilometers, so "letting" didn't enter into it.  But the question reminded me of Jens Voigt's response to a question about being allowed a solo lap of the Champs Elysees in his final Tour de France, "In cycling nothing is given, it must be earned."  Ben King worked hard to have the honor of leading the entire Elite Men's field through his hometown of Richmond, Virginia.

King was followed up the climb by Carlos Alzate (Colombia) and then the rest of their break away companions.  They were surrounded by thousands of screaming fans and the crowd would keep growing as the race progressed.

This is a small original watercolor and ink painting that was created using Yarka St. Petersburg watercolors and Steve Quiller brushes from www.richesonart.com.  The works were done live in the middle of the Fanfest area across from the awards podium as the racing was going on.  Prints and the originals will be available before very long at www.richmond.com (the website of the Richmond Times Dispatch newspaper).
Posted by artofcycling at 1:10 PM