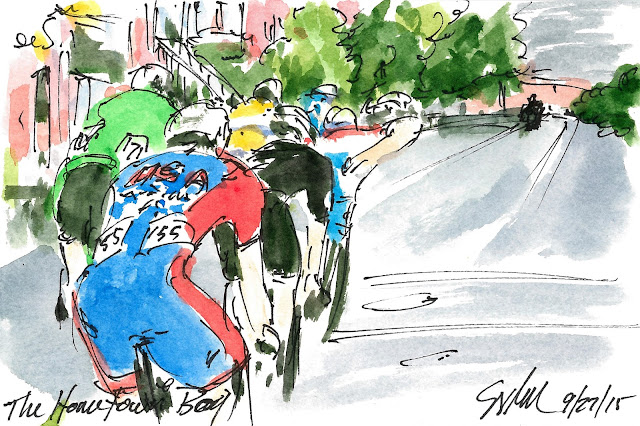 It had to be an unbelievable day for American Ben King, he is racing on the very roads that he grew up on in Richmond, VA.  I'm sorry, but how cool is that?  Every kid dreams of playing in the big game, but getting to fulfill it is something altogether different.  While it wasn't going to be the move that won the day, King went early with a nice size group comprised of Jesse Sergent (New Zealand), Conor Dunne (Ireland) amongst others.  The Richmond fans were thrilled to see their hometown boy out on course as much as four minutes ahead of the peloton.

This is a small original watercolor and ink painting that was created using Yarka St. Petersburg watercolors and Steve Quiller brushes from www.richesonart.com.  The works were done live in the middle of the Fanfest area across from the awards podium as the racing was going on.  Prints and the originals will be available before very long at www.richmond.com (the website of the Richmond Times Dispatch newspaper).
Posted by artofcycling at 12:53 PM