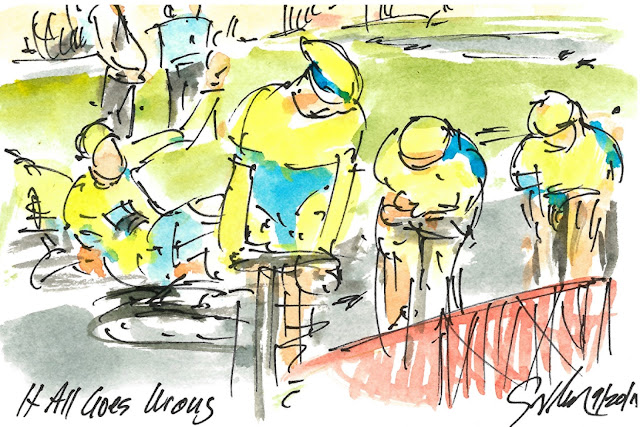 As we all watched the coverage in the Fanfest near the finishing line, there was a sharp intake of breath as members of Tinkoff Saxo hit the deck at the top of the climb out of the city.  It was hard to figure out exactly what went wrong.  There wasn't anything on the road, nor was there a sharp corner or any clear reason why the lead rider should suddenly find himself sprawling on the road taking out a fellow teammate.  All in the hall (including myself) feared that Peter Sagan was one of those on the road.  Fortunately for the hopes of Slovakia and his fans everywhere, he stayed upright and maintains his strong hopes for claiming the Rainbow Jersey on the final day of racing.

This is an original small watercolor and ink painting that is available as an original or two different size prints at the Convention Center.  Later they can be purchased through www.richmond.com.  This was created using Yarka St. Petersburg watercolors and Steve Quiller brushes from www.richesonart.com.
Posted by artofcycling at 10:05 PM