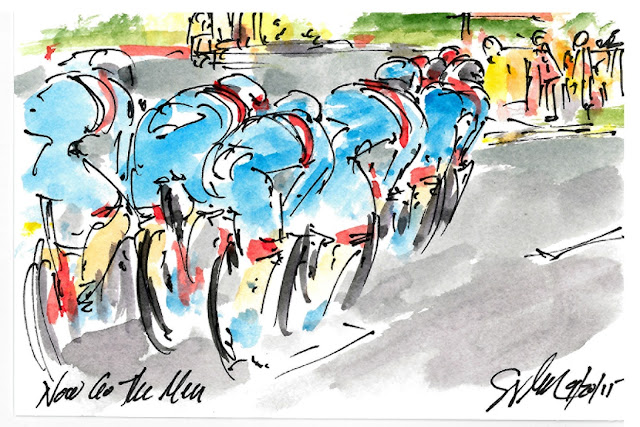 Just a couple hours after watching the best of women's cycling race through the streets of Richmond, Virginia, it was now the turn of the men to show what they could do.  Champion Systems was the first of the Men's Elite teams to storm down Lakeside Avenue in search of the Jeb Stuart Monument that swung them on to the cobbled avenue of "Second Place Trophies".  I should explain that.  Monument Avenue is punctuated with monuments to the generals and president of the Confederacy, the losing side of the American Civil War.  Richmond was the capital of the failed succession from the Union.  The newest monument on the avenue that will not be seen by any of the race courses is of Arthur Ashe, an African American tennis champion from Richmond.

This is an original small watercolor and ink painting that is available as an original or two different size prints at the Convention Center.  Later they can be purchased through www.richmond.com.  This was created using Yarka St. Petersburg watercolors and Steve Quiller brushes from www.richesonart.com.
Posted by artofcycling at 9:02 PM