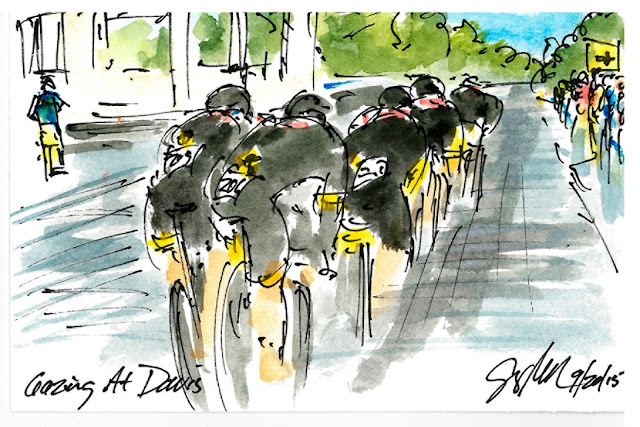 Hincapie Racing Team seemed to take a moment to gaze at the monument to Jefferson Davis, the short lived President of the Confederacy.  Later in the week the UCI World road races will swing around the monument in a Champs Elysees style u-turn.  The similarity is continued to the asphalt cobbles that adorn the road surface.  While these cobbles are rough to ride, they are smooth as silk when compared to those that face the peloton on other sections of the road racing course.  At least the organizers were kind enough to avoid the Paris Roubaix level pave for the time trial racers.  Not long after the team went down the avenue, a drunk and foolish man drove his hot rod Camero on to the course nearby, apparently hoping for fame.  Fortunately no one was hurt except for his hopes of ever owning a driver's license again.

This is an original small watercolor and ink painting that is available as an original or two different size prints at the Convention Center.  Later they can be purchased through www.richmond.com.  This was created using Yarka St. Petersburg watercolors and Steve Quiller brushes from www.richesonart.com.
Posted by artofcycling at 9:25 PM