Tour Down Under: Grabbing Another 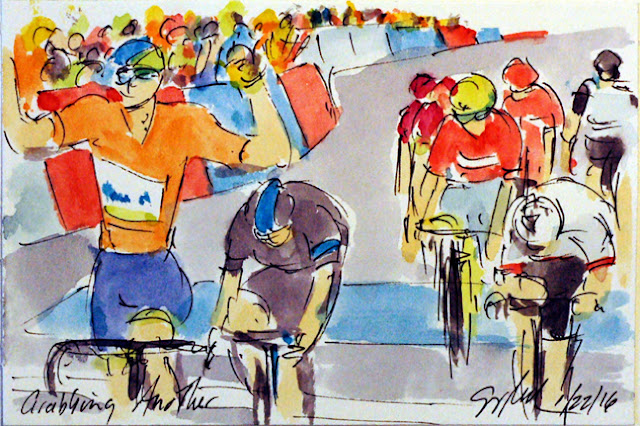 The big debate as the riders road up the climb out of Port Elliot was whether or not the sprinters would be able to contest for the win in Port Victor.  They were there, but didn't have the legs to stop Simon Gerrans (Orica GreenEdge) from claiming his second victory in a row in the Tour Down Under.  Just behind the man in the Ochre Jersey of race leader was Ben Swift (Team Sky) and Giacomo Nizzolo (Trek-Segafredo), both sprinters.  Just missing out of collecting bonus seconds was Jay McCarthy (Tinkoff) who held second overall but lost time to the victorious Gerrans.  It is begining to look like Gerrans will claim yet another overall victory in his home tour.  Only Willunga Hill and the final stage stand in his way.

This is a small original watercolor and ink painting created using watercolors from www.richesonart.com and is available through my artist website at www.greigleach.com.  To purchase this particular painting, just follow the direct link at the end of this post.  In addition, be sure to check out my new book, "Art of Cycling: Richmond 2015 UCI Road World Championships" available now at www.artofcycling.bike.

Posted by artofcycling at 3:54 PM