Tour Down Under: The Throw for the Line 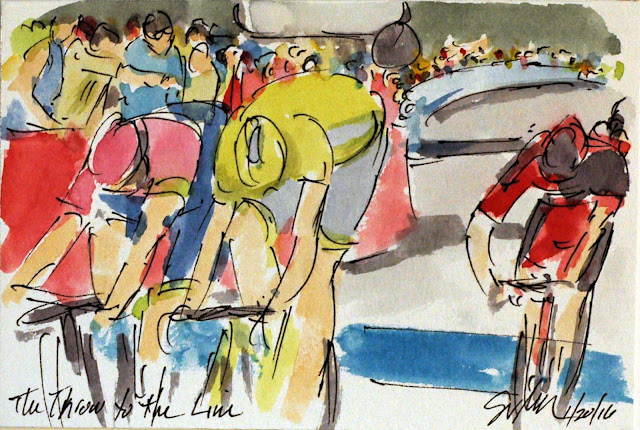 Once Peter Kennaugh (Team Sky) had jumped it was up to the others to chase the British Champion down.  The first to set off in pursuit were Jay McCarthy (Tinkoff) and Rohan Dennis (BMC).  Diego Ulissi (Lampre-Merida) left it just a little to late, almost catching the fading McCarthy at the line.  With McCarthy's win, he claimed the Ochre Jersey of overall leader, with Ulissi and Rohan following the winner of the stage on the line and in the GC.  Unfortunately for Orica-GreenEdge, Daryl Impey tangle handlebars with an Astana rider and went down taking out Simon Gerrans and a number of others in the peloton.  All were given the same finishing time, but it was the bonus seconds that established the new General Classification order.

This is a small original watercolor and ink painting created using watercolors from www.richesonart.com and is available through my artist website at www.greigleach.com.  To purchase this particular painting, just follow the direct link at the end of this post.  In addition, be sure to check out my new book, "Art of Cycling: Richmond 2015 UCI Road World Championships" available now at www.artofcycling.bike.