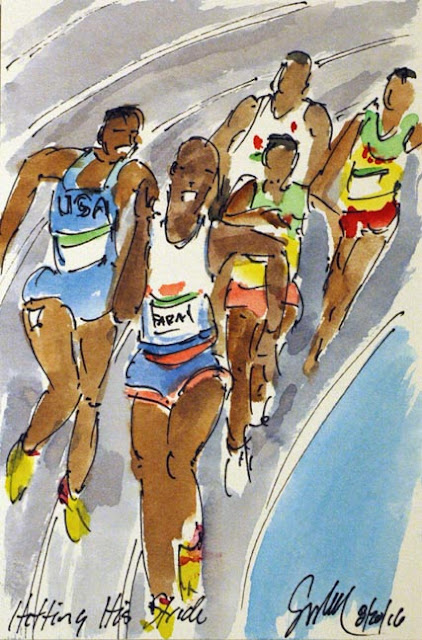 The announcer for NBC Olympics seemed to be getting very frustrated with how everyone was racing.  It was his possibly considered opinion that no one was racing in such a way as to be able to beat Mo Farah (Great Britain).  No one did.  The American Paul Kipkemon Chelimo crossed the line in the Silver Medal position with the on of the Ethiopians, Hagos Gebrhiwet, coming in third.  Chelimo was told during his post race interview that he had been disqualified.  His reaction was genuine and amazingly not obscene (I guess he remembered he was on international TV).  With all of the elbowing and pushing, he had stepped on the line of the edge of the track.  His DQ along with three others, moved his teammate Lagat into third.  Later in the evening, he was reinstated (I don't know about the others) and was allowed to stand on the second step of the podium and receive his Silver Medal.  Farah has now taken Gold in the 5000 Meter and the 1500 Meter races for the second consecutive Olympics.