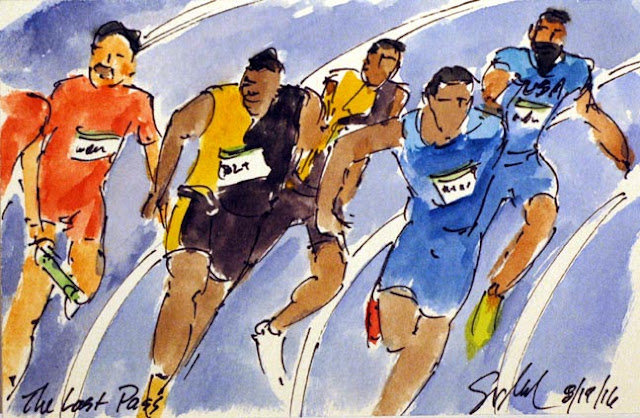 There are several different ways to look at this title, well, two anyway.  This is the last pass in the men's 4x100 relay, the last time the baton changes hands before the anchormen take the race to the finish line.  According to Usain Bolt's (Jamaica) own statements this is his last Olympic race, and therefore this is his last baton pass in the Olympics.  And boy oh boy did he make it count.  This time he left everyone behind despite being the third member of this group to get the aluminum rod from his teammate.  And he finished the race of in a new World Record.  Team Japan got the baton first, but finished in second winning the Silver.  The USA moved up to third, but then continuing the American women's 4x100 woes, were disqualified for a bad baton pass.  They didn't drop the baton like the women had done in qualifying, they passed too soon, out of the transition zone.  So it is Team Canada that gets to take home the Bronze Medal.