Tour of Britain, Stage 6: Not Much Left 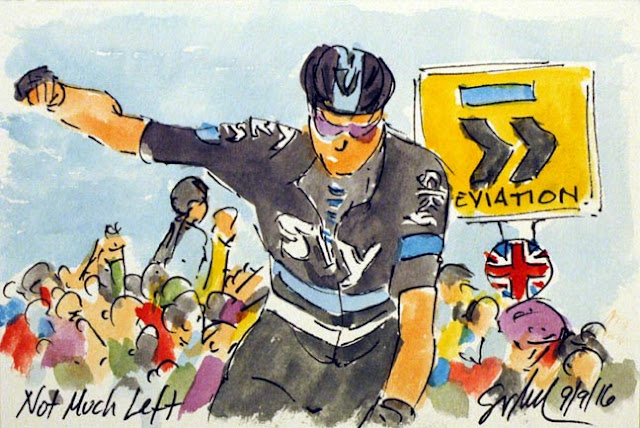 It was Wout Poels (Sky) who was able to get away from the duo of Rohan Dennis (BMC) - second on the day, and Tom Dumoulin (Giant-Alpecin) - third on the day.  The Dutchman on the English team barely had the energy left to the salute the crowd as he crossed the summit and only mountain top finish of the 13th Tour of Britain. Perhaps the number 13 (his bib number) is a very lucky one for Poels.  With the Yellow Jersey dropped about four kilometers from the top, it would be someone else on the podium in a little while.  Dennis had started the day in fourth, but it was the star of stage two, Steve Cummings (Dimension Data) who takes over the Yellow Jersey of race leader with Dumoulin moving into second overall and Dennis in third.

I was amused by the bright yellow sign behind Poels.  It read 'deviation,'  which I realized is the way the British would label what I call a 'detour.'  But a deviant has a much different connotation, thus so does a deviation, to me.

This is a small watercolors and ink painting measuring just 4"x6" and was created using Yarka St. Petersburg watercolors and Steve Quiller brushes from www.richesonart.com.  This painting and all of my Olympics artwork will be available through my artist website at www.greigleach.com.  To purchase this particular painting just follow the direct link at the end of this post.  It is only $75 USD and international shipping is available.