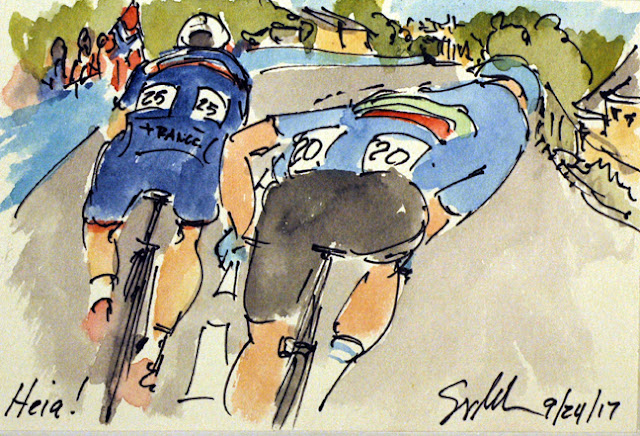 Heia (Norwegian for Go) is what the fans were yelling as the peloton and every other racer road by.  While I doubt that Gianni Moscon (Italy) was saying, "heia!" he definitely wanted Julian Alaphilippe (France) to go as hard as he could.  The pair had opened up about eight or nine seconds on the peloton as the crested the Salmon Hill climb for the final time.  Now it was a ten kilometer basically down hill dash for the line.  A large group of all of the race favorites were chasing hard pulling away from the rest of the peloton that wouldn't see them again until the post race festivities.

We were all in dismay around the world as the video feeds dropped first from the motorcycles and then the helicopters as the chase was truly on for the Rainbow Jersey.  All we could do was watch lead vehicles ride by waving to the crowds as we waited for the peloton to appear near the finish and into the lenses of the stationary cameras.  Would these two stay away, or would it be a bunch sprint?

This is a small watercolors and ink painting measuring just 4"x6" and was created using Yarka St. Petersburg watercolors and Steve Quiller brushes from www.richesonart.com.  This painting and all of my Olympics artwork will be available through my artist website at www.greigleach.com.  To purchase this particular painting just follow the direct link at the end of this post.  It is only $75 USD and international shipping is available.