Tour Down Under, Stage 2: Up the Final Climb 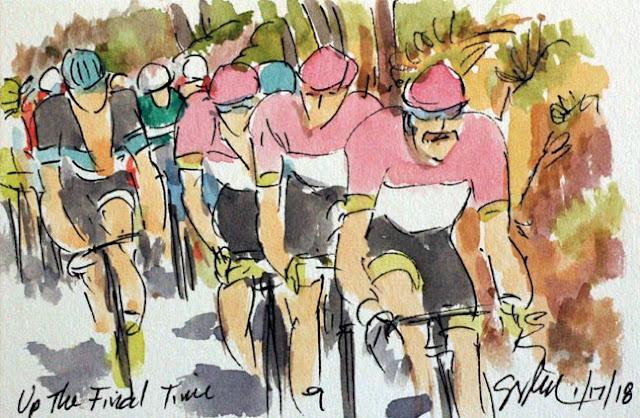 The peloton pulled back in the final break away rider with about 14 kilometers left to race.  Now it was time to play a game of rolling chess.  With the bonus seconds William Clarke (EF Education First-Drapac) had won early in the stage, if the three podium finishers did not place, or Clarke took the stage, he would pull on the next Ochre Jersey of the 2018 Tour Down Under.  So it was that Mitchell Docker and two other members of Clarke's team hit the front with just seven kilometers of climbing left to go to the finish.  Keeping an eye on the pink clad train were, Elia Viviani (Quick Step) and Maciej Bodnar (Bora-Hansgrohe).  It should be noted that Andre Greipel (Lotto Soudal) had lost contact with the peloton, but the other two from Stage 1, Peter Sagan (Bora-Hansgrohe) and Caleb Ewan (Mitchelton-Scott) were just behind this leading group.

This is a small 4x6 inch original watercolor painting that is available through my artist website at www.greigleach.com  To purchase this artwork, just follow the direct link at the end of this post.  And yes, international shipping is available.