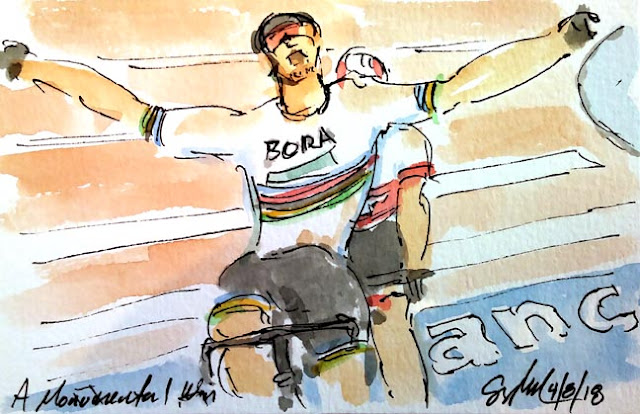 You know I wasn't going to paint a whole race without slipping at least on pun in a title...

With the chasers unable to close the space between themselves and this duo of Peter Sagan (Bora-Hansgrohe) and Silvan Dillier (Ag2r La Mondiale), it was not a surprise to see Sagan out sprint the last member of the days early break.  Immediately after this victory salure, Sagan reached out to congratulate Dillier and to thank him.  Had it not been for Dillier's efforts, it is certain that Sagan would have been caught.  This is the first time the wearer of the Rainbow Jersey has won Paris Roubaix since Miguel Indurain did it in 1981.  Let's hope that Sagan will continue to build on Indurain's achievements.  Chapeau!

This painting is sold!