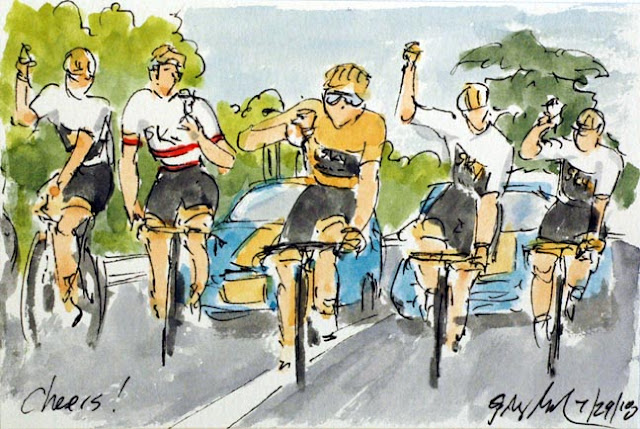 The final stage of the Tour de France is broken into two distinct parts.  First the riders amble along on the way to Paris, chatting, visiting each other, and celebrating the fact that they have finished the incredible effort of racing the Tour de France.  Another tradition is the toast by the winning team, or the team of the winner toasting each other over a fight well fought.  Team Sky has been doing the arm and arm riding across the finish line for a while now, but today they road together toasting the horde of press motorcycles and photographers and each other.  Only one of the team didn't make it to Paris.  Gainni Moscon lost his temper and punched another contestant forcing his ejection from the race.  On Geraint Thomas's right are Michal Kwiatkowski and Chris Froome (who was the one in Yellow for four previous Tours de France) and on his left are Wout Poels and Luke Rowe.  Sadly, Egan Bernal and Jonathan Castroviejo were just out of frame.  Froome's work on behalf of his teammate and friend have forced me to re-evalutate my opinion of him.  He was kind, generous and did all he could once it was clear that Thomas was going to be the best place in the team, and that he would carry the Maillot Jaune to Paris.

This painting is sold!
Posted by artofcycling at 1:41 AM