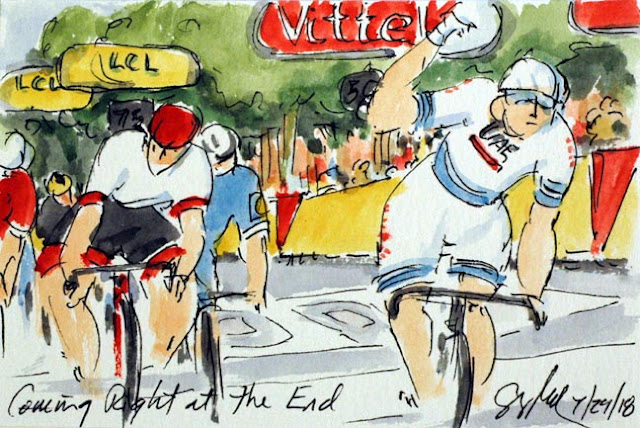 Alexander Kristoff (UAE Team Emirates) seems to have been there or there abouts in nearly every sprint of this Tour but hadn't managed to win a stage coming into the finale on the Champs Elysees.  Today he came right with his sprint taking the most famous of sprints in all of cycling.  While he may have been helped by Peter Sagan's injuries slowing down the Maillot Vert, he got the better of John Degenkolb (Trek-Segafredo) and Arnaud Demare (Groupama-FDJ).  I'm sorry that I couldn't get Demare into the image, but not as sorry as he was not to be the first Frenchman to win in Paris in a long, long time.

As is usually the case, none of the jersey changed hands on the final day of the Tour (although sometimes the Maillot Vert goes down to the final sprint).  So it is that Geraint Thomas (Sky)wins in the Maillot Jaune.  Peter Sagan (Bora-Hansgrohe) takes the Maillot Vert, setting a new record of points - eclipsing his own record.  Pierre Latour (Ag2r La Mondiale) takes the Maillot Blanc of best young rider .  And finally, Julian Alaphilippe (Quick Step) claims the Maillot a Pois of the King of the Mountains.  I should also mention that it was Movistar that won the team competition.

This is all for this Tour, I plan on painting some fall classics and the UCI Road World Championships in September.

Posted by artofcycling at 3:09 AM