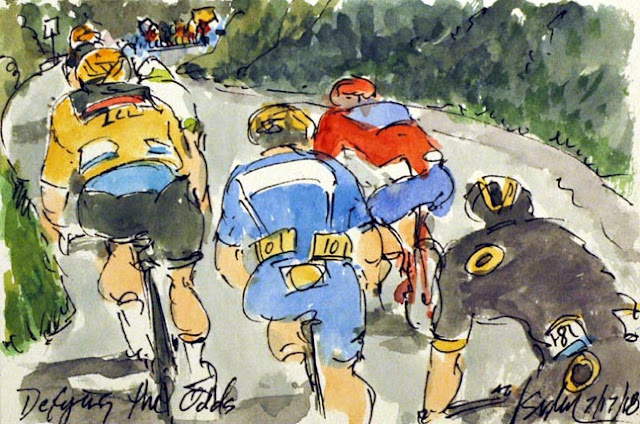 There were just two riders up ahead of this group containing the Maillot Jaune of Greg Van Avermaet (BMC).  Van Avermaet had been widely predicted to lose his yellow jersey today, passing it over to the fomidable Team Sky.  Even Van Avermaet predicted that he wouldn't be in yellow when they reached Le Grand Bornand.  Instead as he climbed the Col de Romme, he had five minutes on the Sky lead peloton.  It seemed very unlikely that the peloton would catch him with just a couple of kilometers to this summit, one more climb, and just a total of 34 kilometers the the finishing line.  Joining Van Avermaet in the effort to stay away (if not chase down the leaders) were Lilian Clamejane (Direct Energie), Jon Izaguirre (Bahrain-Merida) and Julian Alaphilippe (Quick Step).  Just peaking out from the shoulders of the Maillot Jaune is Serge Pawels (Dimension Data).

This is a powerful group that the peloton let slip their grasp.