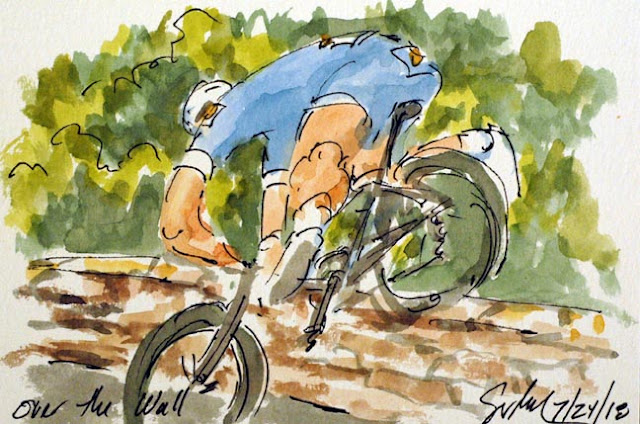 Normally, I avoid painting the wrecks of the Tour.  It isn't what excites me about watching the race.  In fact I called out as I was watching this very scary crash play out.  Philippe Gilbert (Quick Step) was flying down the back side of the Col de Portet d'Aspet when he locked up his rear wheel in a sharp left turn.  He tried valiantly to regain control put the stone wall was just too near.  As he hit the wall, he came off the bike, used his hands to avoid hitting the wall with his head, and then dropped out of sight.  Amazingly, he wasn't seriously hurt.  As he got ready to remount, he gave a wink and a thumbs up to the camera. (That is part of the reason I painted this, it ended up alright)

Ironically, he went over the wall almost exactly where Fabio Casterelli crashed in 1995.  Sadly, on that occasion, Casterelli did not survive.  This was before helmets were mandatory in the peloton, but was one of the prinicple reasons that they are now.