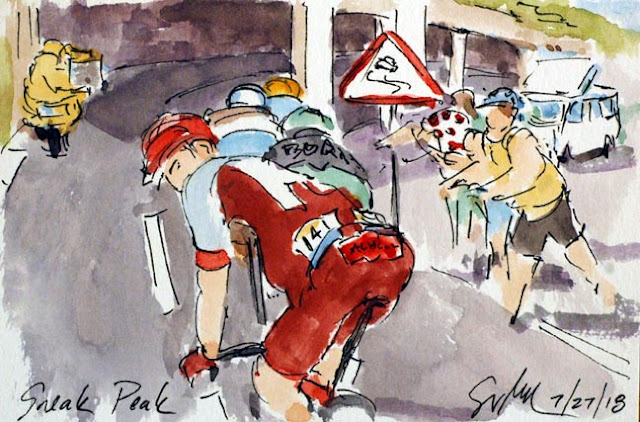 With just one more stage in the mountains, nearly everyone who could was out on the offensive.  Ilnur Zakarin (Katusha-Alpecin) wasn't having the Tour he had hoped for.  Quite a few of his teammates went out of the race in the early stages due to crashes and illness.  And then he just didn't have the legs, until today.  As this foursome off the front rides through one of the snow tunnels on the Col du Tourmalet, he peers back over his shoulder to see just how many of his erstwhile breakaway companions they had gotten rid of.  The Zakarin group is being led my Mikel Landa (Movistar), Rafal Majka (Bora-Hansgrohe) and Romain Bardet (Ag2r La Mondiale).  All were hoping to be the ones to stay away for a stage victory.  Two of the teams represented have yet to win a stage this year, the others have a tiny bit of pressure eased from their team managers.