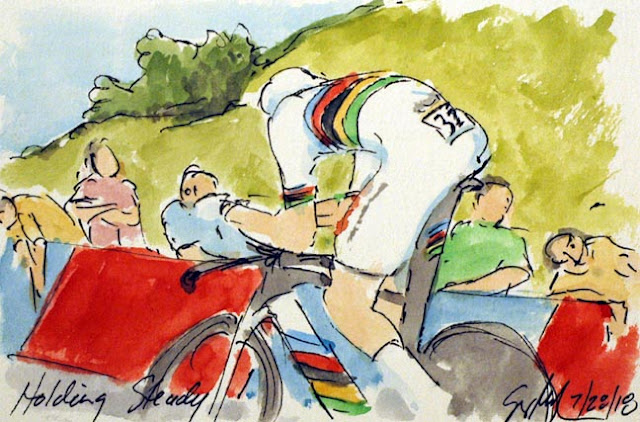 Their are several ways to interprete this title.  A setup I always enjoy when titling my artwork.  Tom Dumoulin (Sunweb) had a few objectives for today's last true day of racing in the Tour.  As the World Champion of the men's individual time trial, he was looking to honor the rainbow stripes and win the stage.  That goal he accomplished.  Just.  He was riding to keep his second place over all, thus holding steady on the GC, which he did managed to do.  He held a steady even timed ride to the man trying to take his second place, Chris Froome (Sky), he accomplished that goal as well.  And finally, he hoped to over take Geraint Thomas (Sky) for the yellow jersey of race leader, that he was unable to accomplish.  He took a few seconds out of the Maillot Jaune, but he will have to content himself with his second second place in a grand tour in a row.

As Dumoulin was getting ready to ride, his skin suit went missing.  As the announcers, Phil Liggett and Paul Sherwen, were telling the story, I had a vision of Dumoulin racing the stage in the nude.  Unfortunately for us all, the makers of his skin suit were able to sew up a new kit and get it to the race before such a revealing bike ride.  I am sure there are many that would have enjoyed the spectacle. although probably not Tom.