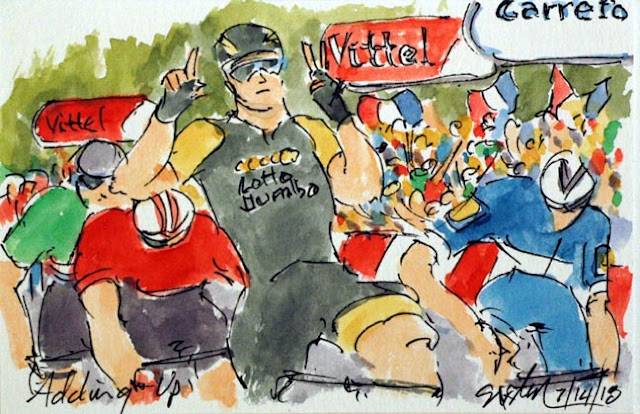 Dylan Groenewegen (Lotto NL Jumbo) has had to stage wins in as many stages.  The Dutchman has had two amusing victory salutes as well.  The first win he came across the line with his index finger to his lips, in affect quieting all of those who had said he didn't have the legs to win at the Tour.  Today he held on finger aloft on one hand and then counted to two on the other, saying I just went two for two.  Behind Andre Greipel (Lotto Soudal) got swamped by Groenewegen to take second.  After literally butting heads with Greipel, Fernando Gaviria (Quickstep) bounds his bars as he takes third on the day.  It will remain to be seen if the referees take any action against either sprinter.  The actions were the same as the events that lead to Sagan being thrown out of the 2017 Tour with the important exception that no one crashed in the sprint today.  Ever consistent Peter Sagan (Bora-Hansgrohe) tooked fourth on the day.  He may a rare mistake of opening up his sprint just a bit too early to hold of the other three sprinters.  The Frenchman hoping to wave the flag of victory on Bastille day, Arnaud Demare (Groupama-FDJ) finished sixth on the day.

I did just learn that Gaviria was relegated on the stage for his agression in trying to move Greipel out of his way, as was Greipel for squeezing the Colombian against the barrier.  The resulting placing moved Sagan up to second on the stage and Kristoff into third.  With Gaviria and Greipel earning no sprinter's points on the day, Sagan's lead may already be unsurmountable in the race for the Maillot Vert (assuming he finishes the Tour).