Tour Down Under, Final Stage: Two, Three, One 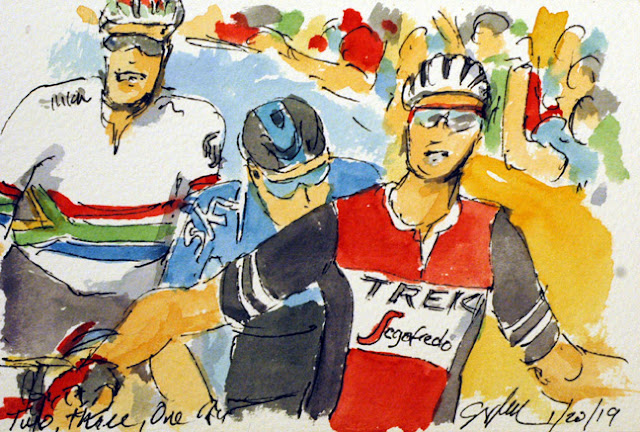 The strange title of this painting refers to the overall placing of these three on the general classification.  While Richie Porte (Trek-Segafredo) won the stage, and added a sixth consecutive win over the top of Willunga Hill, it was Daryl Impey (Mitchelton-Scott) that was third on the stage,  However, Impey won the 2019 Tour Down Under.  And he is the first to ever win the race to years in a row.  Wout Poels (Sky) took second on the day, but finished on the final step of the race podium.  While the four day leader of the race, Paddy Bevin (CCC) may not have taken the race victory, it is still a shame that his crash in stage five ensured that he would be unable to wear the final Ochre Jersey of race leader.

I will be back painting some of the Spring Classics like Paris-Nice, Paris Roubaix and Fleche Wallone, among others.  I hope you will check out the work as it happens.  And that you will follow me here and on twitter @ArtofCycling.