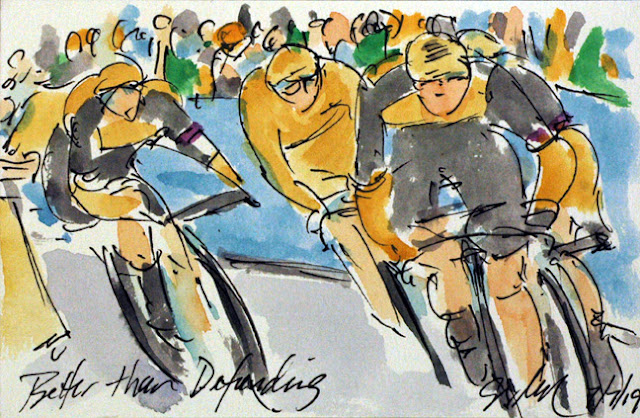 Team Jumbo-Visma had planned to go out and defended the Maillot Jaune of their sprinter.  However, yesterday their designated sprinter crashed and wasn't able to contend the finale.  No matter, one of his lead out men, Mike Teunissen step into his place and took the stage yesterday.  So today they are defending the Maillot Jaune.  Yet, they did more than defend it, they extended his lead over all of the other contenders in the 2019 Tour!  The team crossed the line 20 seconds quicker than the erstwhile stage leaders, Team Ineos, leaving Teunissen with a 24 second lead over his four teammates, Wout Van Aert, Steven Kruijswijk, Tony Martin and George Bennett.  He has 34 seconds on the next guy on the general classification who isn't a teammate.  Chapeau!

Posted by artofcycling at 2:08 PM