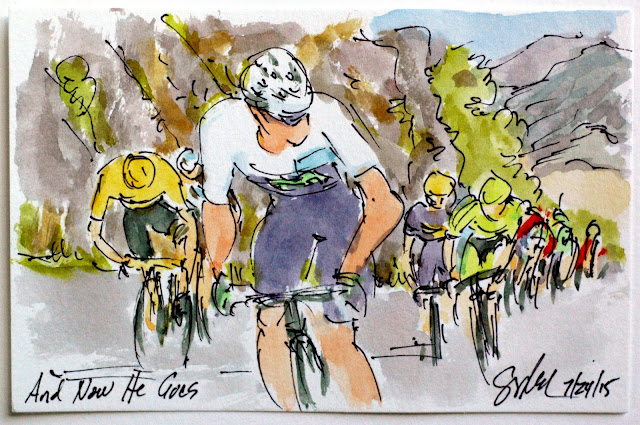 Team Movistar had played their cards very close to their chest during the stage.  They even went so far as telling the press during the stage that Nairo Quintana wasn't feeling very well.  Even adding that they would wait and see just how he was doing when they reached the final climb of the day.  The team stayed off of the front of the peloton and only their number two man, Alejandro Valverde, got into the early moves of the day.  But with just 5 kilometers left on the climb up to the top of La Toussuire, the diminutive Colombian launched a spectacular assault jumping clear of every Tour hopeful.  He had waited until first Team Sky and then Tinkoff Saxo had lost their last remaining helper to their leaders before setting off in search of time against the Maillot Jaune.  Froome, try as he might couldn't get back onto the wheel of Quintana, yet none of the others could get close to Froome's wheel either.  In the end, Quintana pulled back 42 seconds on the race leader, but Froome remains in Yellow for the final day in the Alps, and the penultimate day of the 102nd Tour de France.

This is a small original watercolor and ink painting that was created using Yarka St. Petersburg watercolors and Steve Quiller brushes from Jack Richeson & Company, www.richesonart.com.  They are a small family run art supply business in the mid-west of the United States.  This painting is available, along with all of my cycling art, at my artist website, www.greigleach.com.  To purchase this particular painting for only $60 USD, just follow the direct link at the end of this post.  It is an original painting, so once it has sold, it is gone.  I would recommend not delaying.